TerraMaps is proud to present Road to Asia 1.0.2​
Road to Asia is a map focused on Asian countries. As you know, Asia is the biggest as well as the most populated continent on our planet. It has a lot of different cultures and landscapes with interesting and important roads. So there it is

Road to Asia has been a partner of TerraMaps for a long time. With the combined resources and bright minds in all departments coming together as one. We will deliver an amazing Road to Asia and work hard with releasing it!

What areas is our map included?

In the first release:
Turkmenistan

Release versions will try to match the phases, however, everything is always subject to change

Support
This map will be under futher development for version 1.1, no release date planned yet, and no dependencies except for ETS2 DLC Maps of course, like most map mods, so if we cannot provide concrete answers to all of your questions now, please understand.

Progress
20 JANUARY 2021:
- Road to Asia many of you have been following has joined forces with TerraMaps!

Today we will how the some new progess on the Road to Asia Map. The first version of Road to Asia will contain a few cities in Turkmenistan, following a road connection with The Great Steppe.
Monday we have some more pictures .
So stay tuned, and thank you for the AMAZING support you all have been giving the map, it motivates us a lot. Stay tuned

The palace at the bottom of mountains

The shittest road in Turkmenbashi

Looking forward to this project!
D

This looks really interesting looking forward to the progress of this map. Could I ask how it would link up with promods
D

[WIP] Road to Asia v1.0 - More progress ​
We will show some other work and cities of Road to Asia.

Road to Balkanabat by Tedesco

In the background (Awaza)

It's 4 am here in Balkanabat

Deepestsouth said:
This looks really interesting looking forward to the progress of this map. Could I ask how it would link up with promods
Click to expand...

That is our intention. But stilll some issues to work out, before that is possible

Deepestsouth said:
Could this or will this link with roextended and when they’ve redone eastern turkey and Georgia and Azerbaijan then ferry over to Turkmenistan literally drive from one side of Europe right over to Asia cannot wait
Click to expand...

We will link to Great Steppe from there you can drive to RusMap etc
And we already tested with RusMap and Promods. We still need to do more testing to see if there are any more issus with other maps
D

We know it's been a bit quiet this past week, but we have been picking up mapping Road to Asia past weekend.

While Tedesco is working on Road to Asia finishing up some highways. our other developers are still improving the map, but most of the work (90%) is done. We have also starting testing the map with other maps.
We have run into some problems with this. But most problems are solved now. We can't guarantee that Road to Asia will work with all the maps.
But our intention is that it will work with all the major maps like RusMap, Promods and of course Great Steppe.

The first version of Road to Asia will contain a few cities in Turkmenistan, following a road connection with The Great Steppe.
TURKMENISTAN

Has this city passed the Soviet Test? 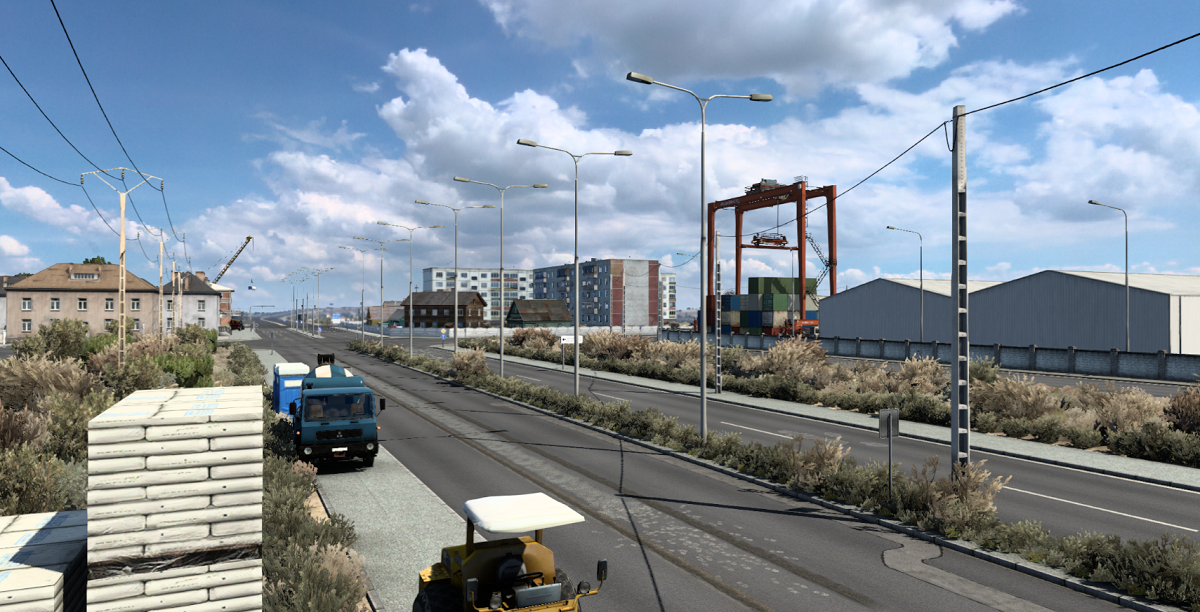 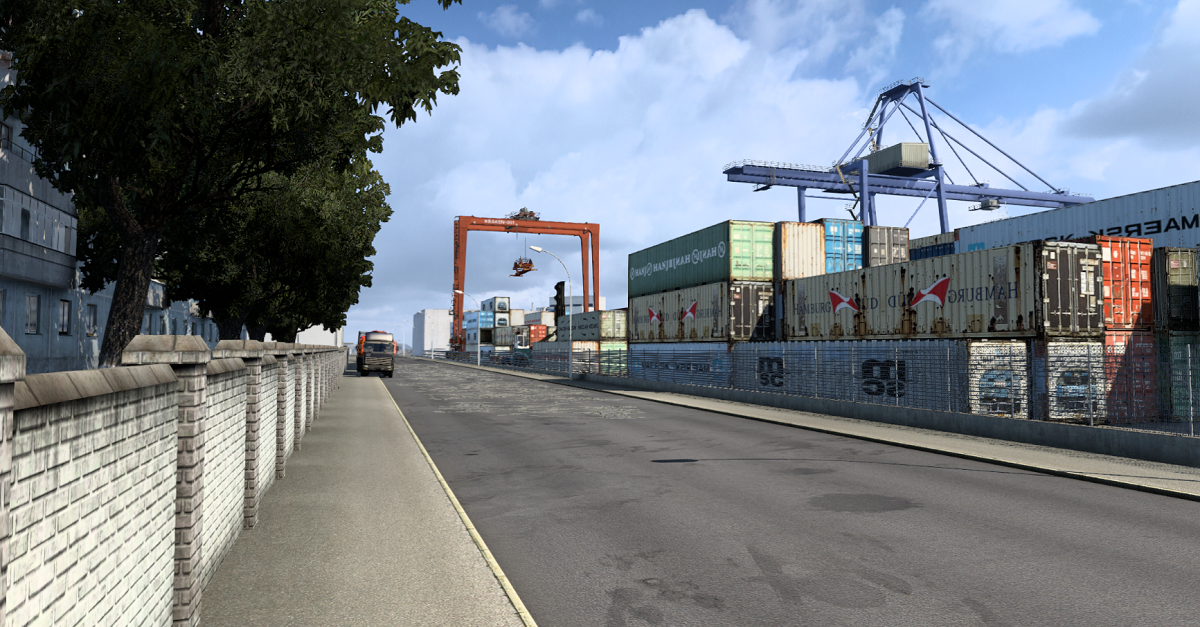 New lighting on Road to Asia

And to give in indication where we will go here is a screenshot of Pyongyang, North Korea (DPRK)
Very WIP, done in under an hour from def to map and first model, all thanks to Pilot. 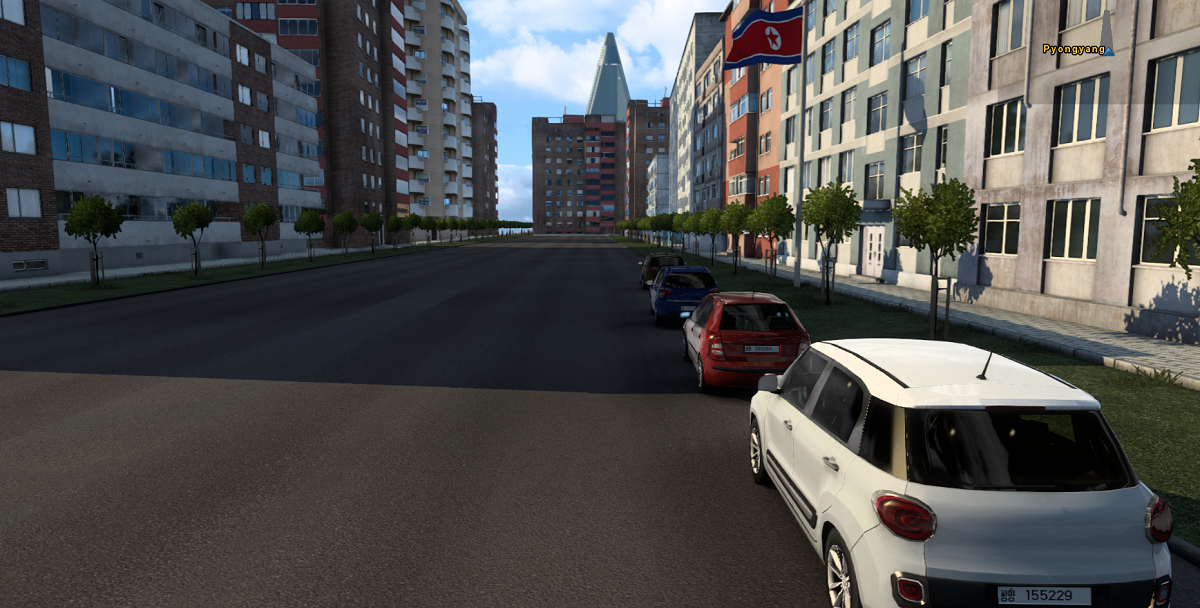 Any comments are welcome!
D

Road to Asia 1.0 is nearing it's completion (very fast). In version 1.0, we'll bring you the Balkan Region of Turkmenistan with over 800km of new, scenic road to explore!
Lead Developer Tedesco has been working really hard the past few weeks doing an amazing job on the cities. Xoryx did a great job in Turkmenbashi, ETS2 Player did a great job in Esenguly, and of course we can't leave out Extremor the founder of the original Road to Asia
The modelers Slender and Mango have done a great job too, as well as our researchers NRS, Hysteria, and SeveMteen. Olaf and Igor have done a great job patching fixes to get the mod to work with different combos, and soon to come will be our beta testers who will help us patch any bugs before release. It truly is a team effort!
This week we will be doing some final touch ups and swiftly entering 1.0 into beta. We will update you all once Road to Asia officially enters Beta, stay tuned! 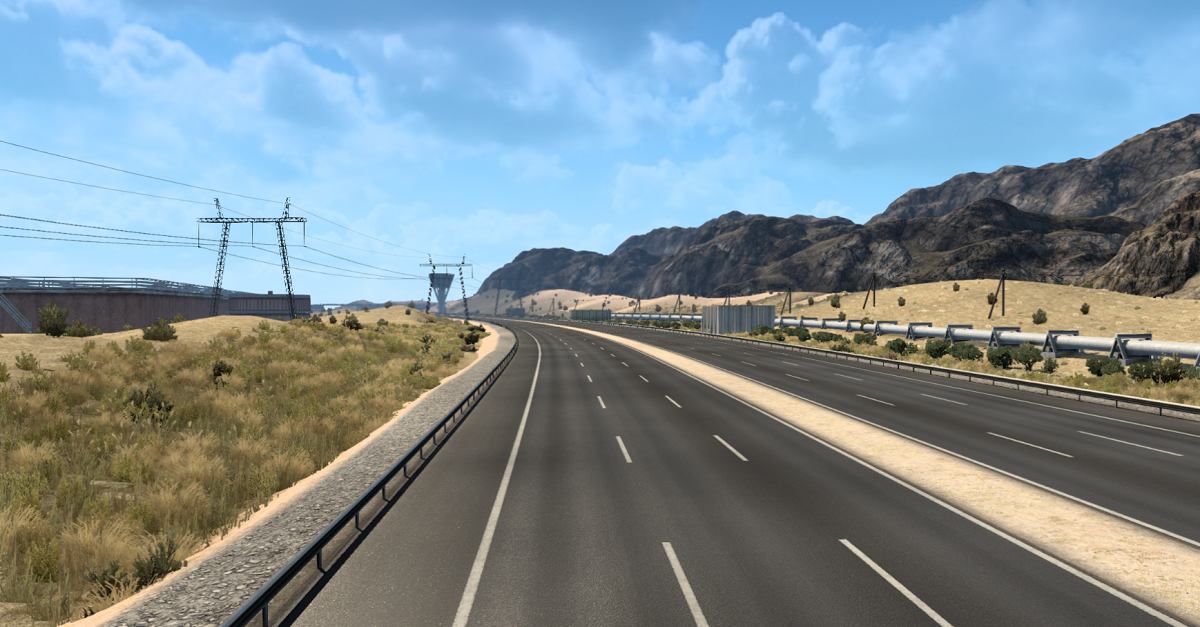 Another View of Turkmenbashi International Seaport 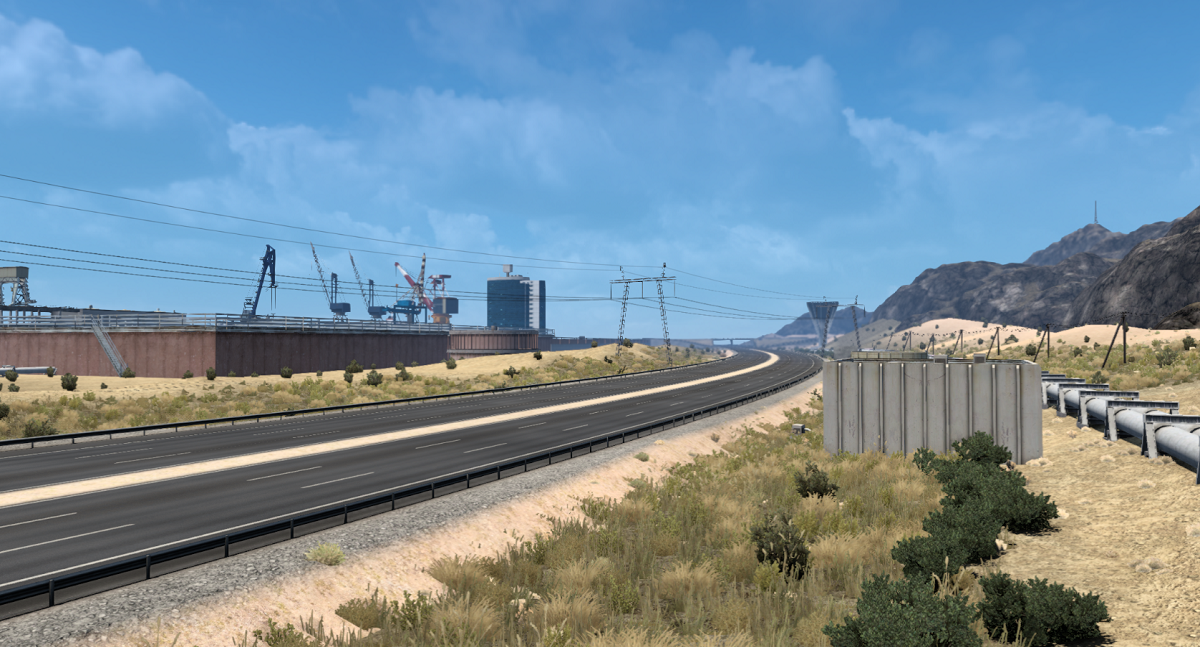 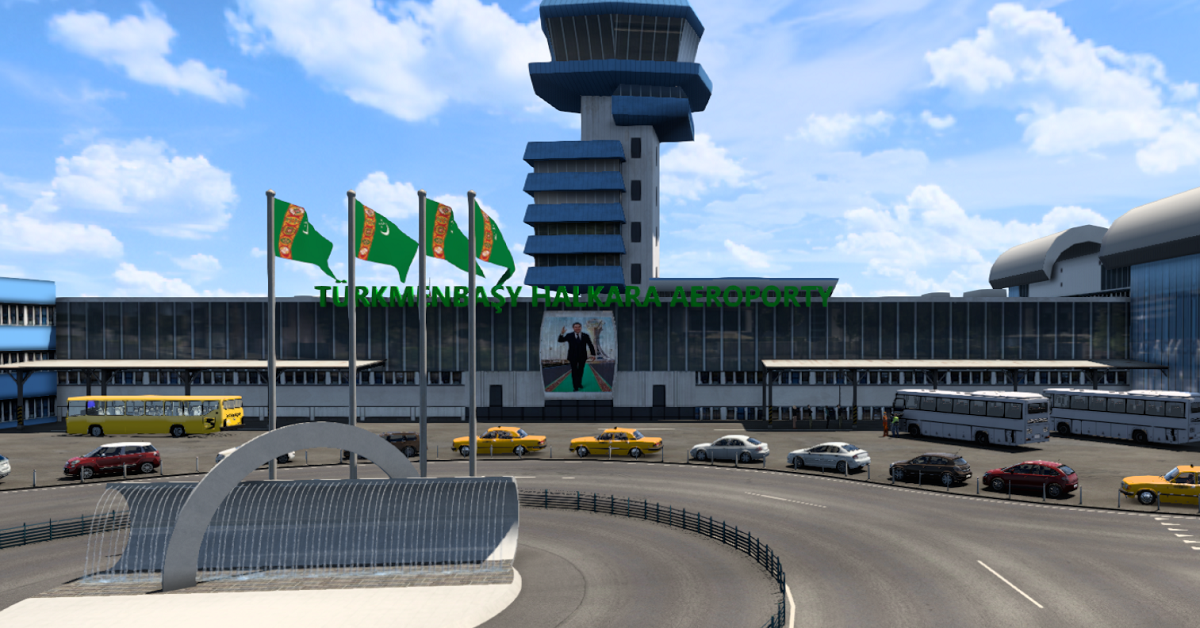 Get your cargo from the Antonov sitting on the ramp from Turkmenistan airlines in Turkmenbashi. Fully detailed airport even at night time. It's so nice, We are going to remove all boundaries and invisible roads so as a nice easter egg, go ahead and race down the runway. Afterall, it's Turkmenistan, what's the worst that can happen 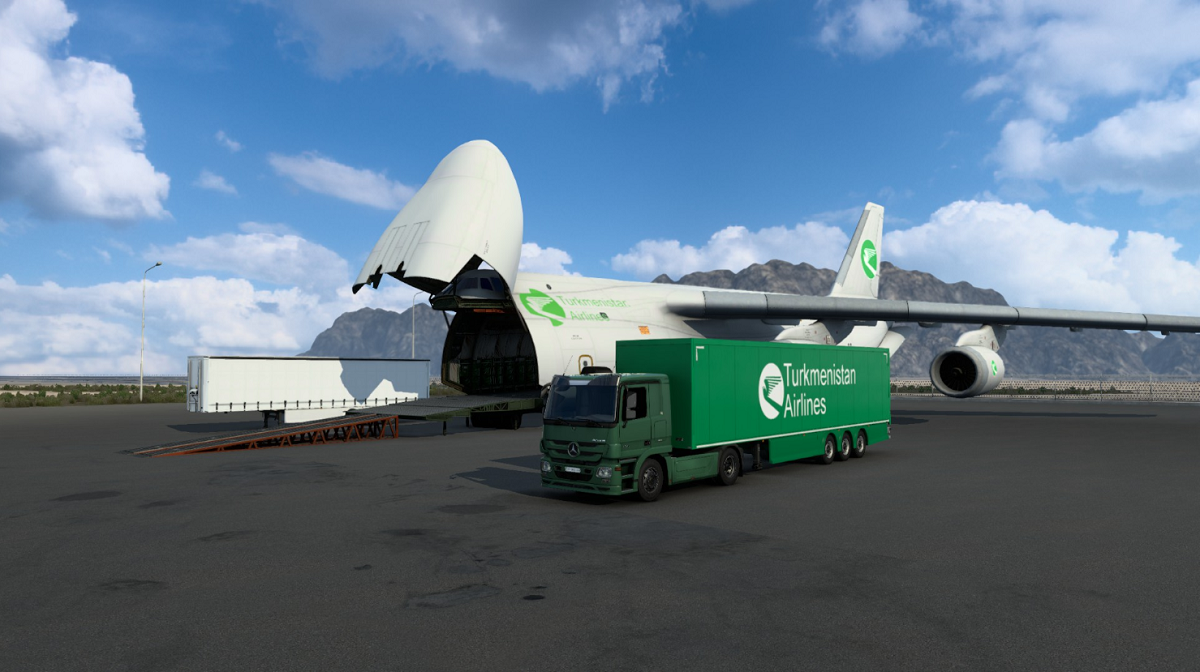 Any comments are welcome!
M