[WIP]Road to Asia Version 1.2 - Development Update Seoul​
One of the last cities we want to create for Road to Asia 1.2 is Seoul. This will be one of the largest cities we have ever created for Road to Asia. Pilot is working on this almost every free hour and now wants to put down the best work he has done.
Seoul will be very extensive and Seoul is worth being released separately. It is not our intention, but that depends on the development of Seoul. The more Pilot is motivated, the faster everyone can enjoy Seoul.
Of course it will not be an exact copy of the real Seoul. This is simply not possible with the ETS2 scale. And it will be an update that will demand a lot from your system and at the expense of the FPS.

We hope you "Like" the work he does for Road to Asia, but especially for TerraMaps in the comments. Even if it's just a thumbs up. Without Pilot and Tedesco, there would be no TerraMaps and you wouldn't be able to drive around anytime soon or one of the biggest updates of TerraMaps.

Another view of northern Seoul

Samsung depot, Seoul, South Korea, with a view of the hanok village 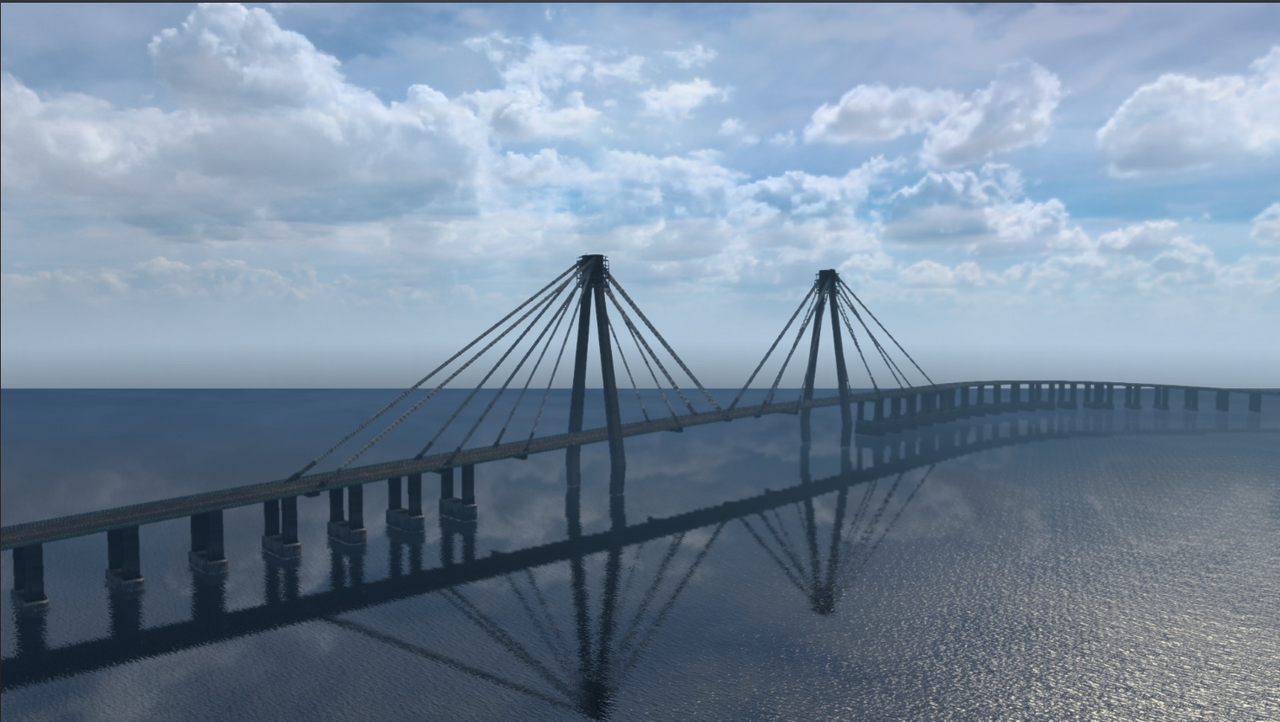 Mapo-Daero street in Seoul at night

(New Country)​
Road to Asia 1.2 has entered ALPHA testing a while ago for Tajikistan, Kyrgyzstan, Western China, and Afghanistan! Patreons are enjoying it now, so if you'd like to enjoy a drive from Wuqia Town, China to Europe, consider joining our Patreon program today

TerraMaps is working hard on the 1.2 version of the Road to Asia map.
Our Develeopers are spending most of our time in Road to Asia while Tedesco and Pilot are balancing out some days between Road to Asia and the Caribbean Map. Please be patient as we have a huge task going on in Road to Asia that has been taking a lot of our time with a shortage on our other maps, again, just takes some patience!

We definitely forecast a Road to Asia 1.2 by the end of the year for sure, but hopefully sooner. As you know, putting release dates on maps just makes maps be released longer and cause disappointment, so I emphasize the word predict!

Now Tajikistan is complete Tedesco on going to Kyrgyzstan. After Tajikistan, Uzbekistan, Iran, Kyrgyzstan is the fourth country we will add. The two cities promised in the Development Update for RTA 1.2 have been completed: Sary-Tash and Daroot-Korgon. 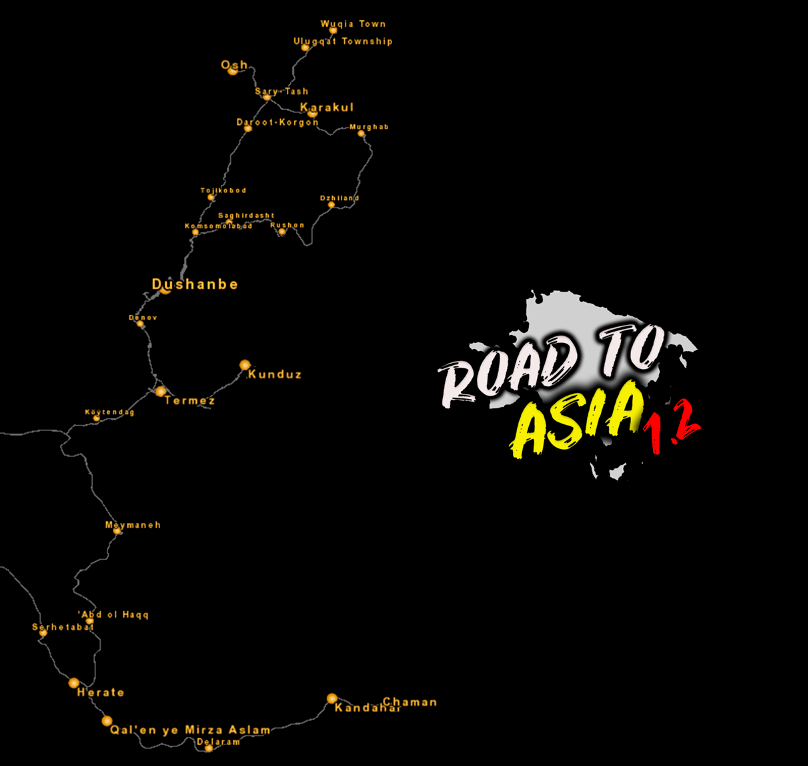 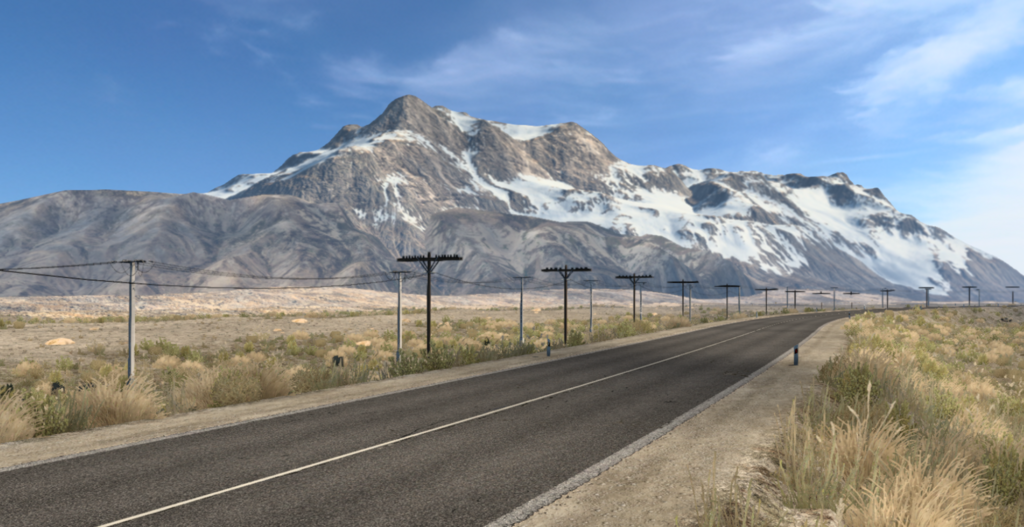 Another View of Osh

We also dropped an other Teaser Trailer for Road to Asia 1.2!
Go check it out:

Having been away from ETS2 for over a year, some days ago I decided to update from previous ETS v1.38 to 1.42 and install RtA (and other new maps that came out in the meantime) and being currently exploring RtA (currently in Turkmenistan after coming from Koreas) I must say that an absolutely amazing work is being done in this map. It is simply fantastic so far!

I'm looking forward to explore the map. I also hope that in the next update you will add India or Nepal to drive to Mount Everest.

Truckers, for some this is maybe will be not such nice news but East Asia will not be updated in RTA 1.2.
(This includes Seoul, Incheon, Dandong, Dalian, Chongju, and Sinuiju). ​
So, do not expect Seoul or more of Korea or eastern China in 1.2. The main reason is that making Seoul is more work then expected and this was community driven from the poll to get a quicker release for the Central Asian content areas.
RTA 1.3 will include an East Asia update. More time is needed to detail and finish these areas like Seoul.

Seoul, officially the Seoul Special City, is the capital and largest metropolis of South Korea Seoul has a population of 9.7 million people, and forms the heart of the Seoul Capital Area with the surrounding Incheon metropolis and Gyeonggi province. Considered to be a global city and rated as an Alpha – City by Globalization and World Cities Research Network (GaWC) Seoul was the world's 4th largest metropolitan economy in 2014 after Tokyo, New York City and Los Angeles. International visitors generally reach Seoul via AREX from Incheon International Airport, notable for having been rated the best airport for nine consecutive years (2005–2013) by Airports Council International.

But still we want to give you a glimsp of what is to come via teaser trailer of Seoul and some schreenshots:

Hanok Village coming out of the Garage and Hyundai in Seoul

Driving through the Gangnam District in Seoul

However, RTA 1.2 will have PLENTY of new and enjoyable areas to highlight, like Pakistan, Kyrgyzstan, Tajikistan, Western China, Uzbekistan, Iran, and more of Afghanistan.
More info on this and ETS2 1.43 will come very soon.

all time i try go to Korea, my game crash

Hello. Have you changed your buffer size?

How to change your buffer size:
Click to expand...

1. Navigate to your game's Documents folder: The folder is located under C:\Users\ {you} \Documents\game
Click to expand...

hello when is coming for 1.43? thank you

tonsinmachinery said:
hello when is coming for 1.43? thank you
Click to expand...

We will inform everyone on the forum soon about 1.43.
At the moment it is best to stay on 1.42. Most maps are not updated yet.
T

OlafJ said:
Hello. Have you changed your buffer size?
Click to expand...

[WIP]Road to Asia Version 1.2 - Beta testing and Last Development Update​
Road to Asia 1.2 is officially in BETA testing now and being enjoyed by the Patreons and Server Boosters right now. If you are interested in participating in this open beta test, check out patreon-info, link your Discord if you sign up, and you'll have instant access to the RTA Beta. (note, this is a BETA so bugs are expected and things may not work right, and distribution of the BETA is monitored and strictly prohibited). Expect a public release as soon as the BETA testing bugs are found and fixed and completed. This is not a sales pitch for Patreonship, only join if you truly support our product. Road to Asia 1.2. will be first released for 1.42. An update for 1.43 will follow later.

Road to Asia will come out soon though which will bring you Tajikistan, Kyrgyzstan, Western China, Afghanistan and some of Iran, uzebekistan and Pakistan. As you know, putting release dates on maps just makes maps be released longer and cause disappointment.
But If you want to know how soon. Just watch the video

Below the compleet map for Road to Asia 1.2 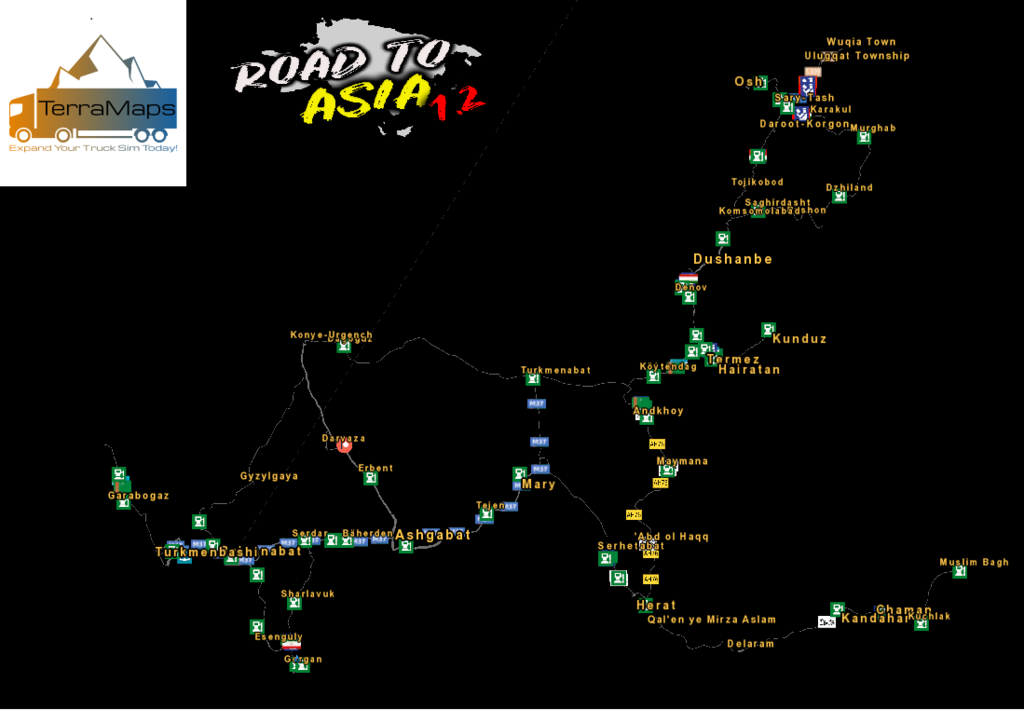 TerraMaps Developer qule has been working hard on finishing Gorgan in Iran. Gorgan is almost complete, with its busy streets, detailed roads, giving you the true Iranian Trucking experience.

Close to the Turkmen border 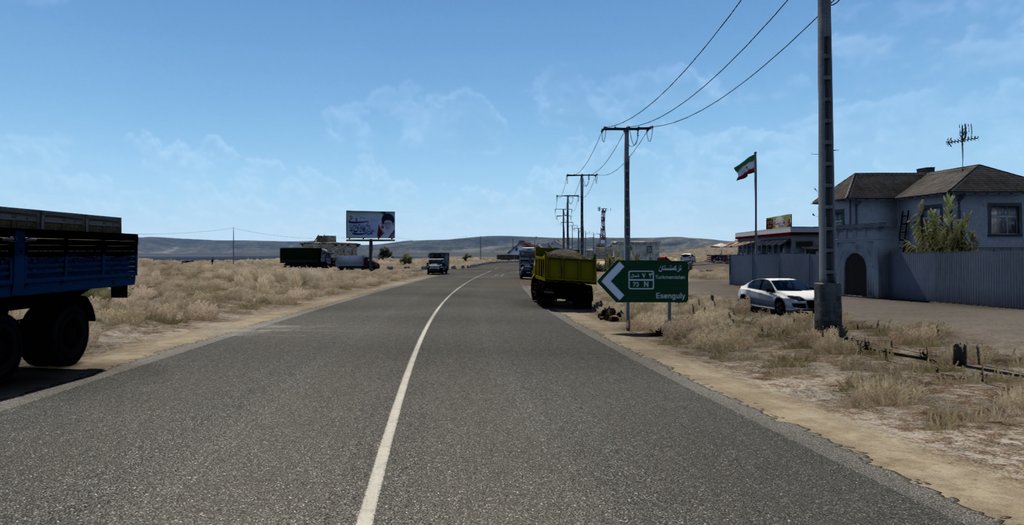 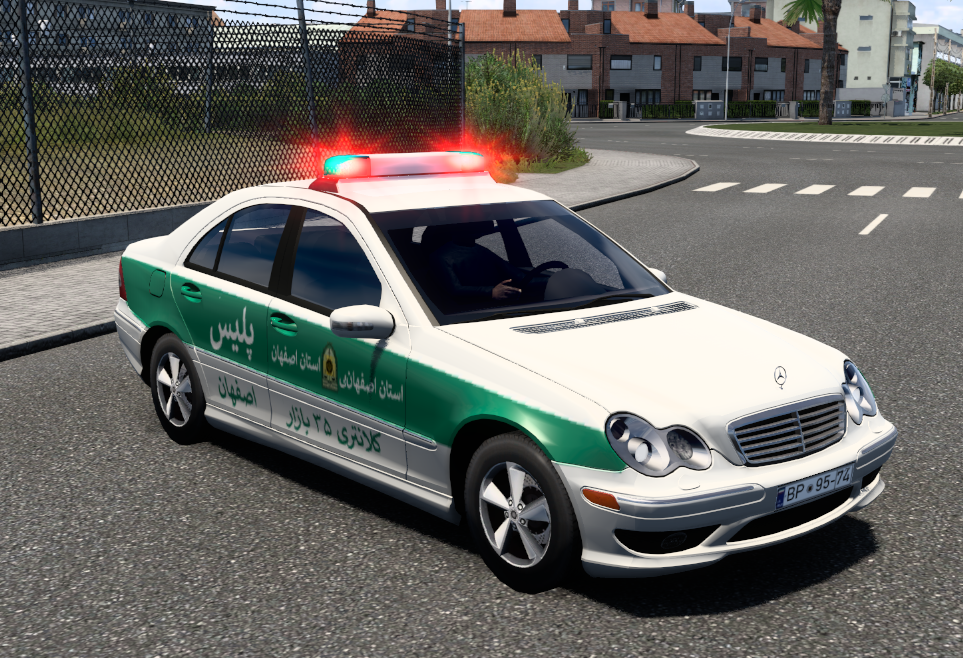 Three cities for RTA 1.2 have been completed: Sary-Tash, Daroot-Korgon and Osh.

The Road to Bishkek

Also Pakistan will be joining the 1.2 update of Road to Asia: For now the cities of Chama, Kuchlak, Muslim Bagh and Zhob will be included. 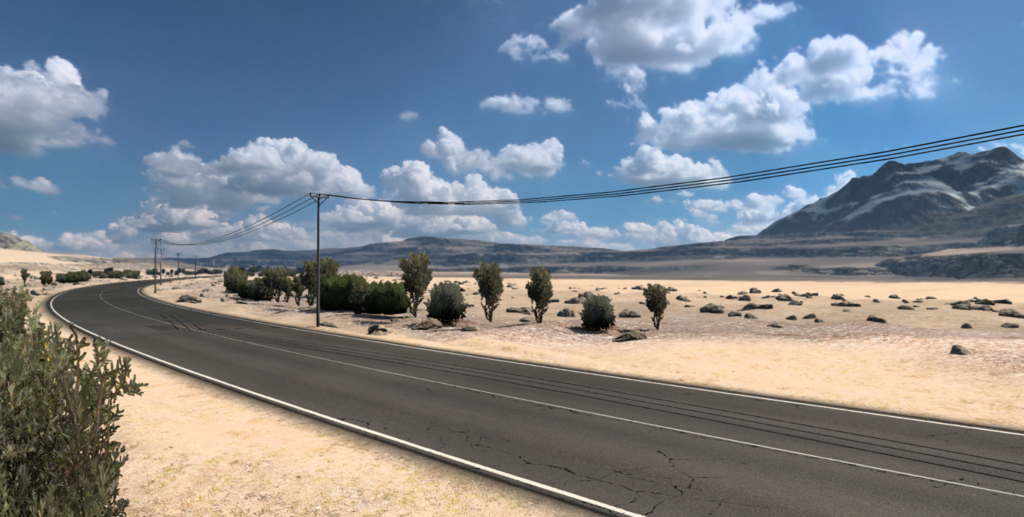 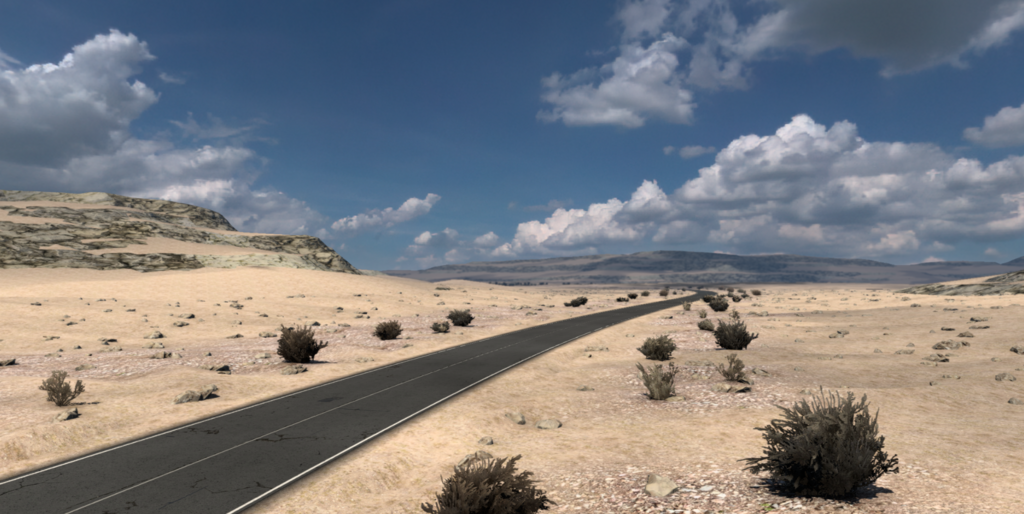 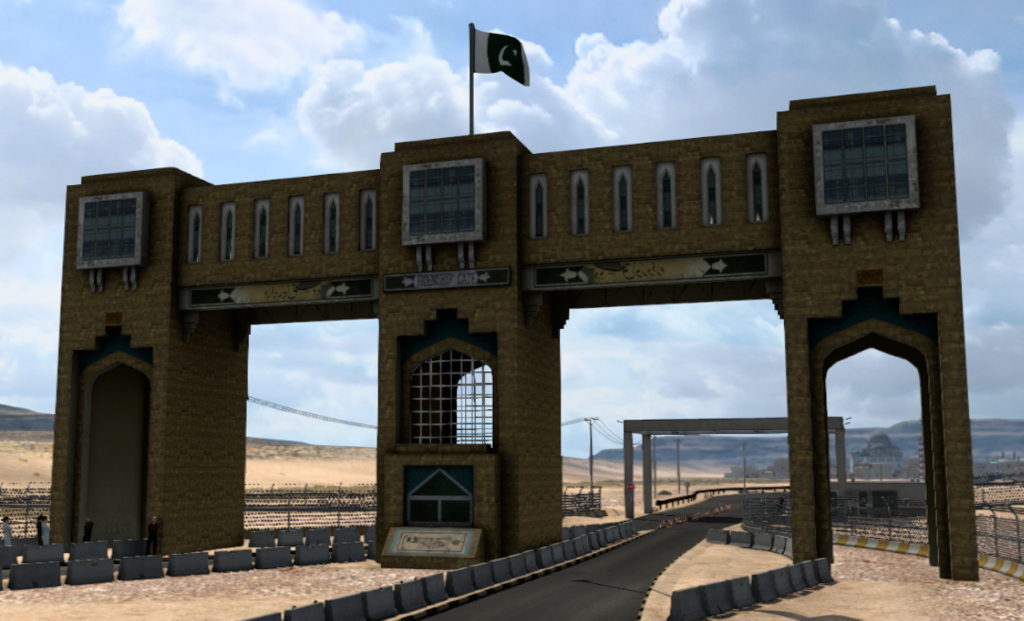 This will be probably be the last update for version 1.2.


We want to end all this good news with this video.

Can we try the test version???

hello. I'm from iran
i have suggestion
It would be better if you edit iranian police car text. I mean "استان اصفهان" and "کلانتری 45 بازار"
Because they re name of cities and اصفهان or Esfahan is only one of the cities of iran and Gorgan is not part of it.
And thank you for your great work...
if you wanted any information about my country i would be happy to help.
And Happy Christmas

We have not made any plans for India. But for sure we will do it
We are doing whole of Asia expect Japan (Project Japan) and Indonesia (JRR)
Last edited: Dec 16, 2021

rale said:
Can we try the test version???
Click to expand...

Yes if you are a Patroen.
See our Patreon Program